TURNING HEARTS TOWARD HIM 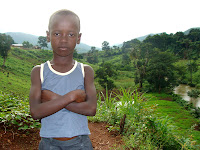 "I will set my eyes on them for good, and I will bring them back to this land. I will build them up, and not tear them down; I will plant them, and not uproot them. I will give them a heart to know that I am the Lord, and they shall be my people and I will be their God, for they shall return to me with their whole heart.” -Jeremiah 24:6-7

As the afternoon faded into dusk I sat, listening to Karim, a shy yet confident 15 year old orphaned boy tell his story.

“So, how old were you when all this happened?” I asked, “I don’t remember my exact age but I was just a young boy.” Karim explained.

We both stared off into the horizon overlooking some fields where farmers worked before sundown.

Karim continued, “After seeing my father slaughtered by the rebels, my mother and I fled into the bush and wandered for several weeks looking for a safe village to take refuge. Eventually we made it to a village where one of our distant relatives lived.”

Karim paused for a few seconds… “after we had arrived my mother got sick and within a few days she was gone. My heart was broken… there I was with no father or mother and now living with distant relatives who cared very little for me.”

I sat in disbelief as I listen to Karim’s story and tried to grasp the reality of what this boy has seen in his short 15 years.

Believe it or not, Karim’s story is not an uncommon one in a country ravaged by a decade of civil war. All too often our team of 27 students and staff heard similar stories from other orphaned children and displaced families in Sierra Leone.

One may be tempted to ask, “Where is God in the midst of these tragedies?” However, I experienced the presence of God in Sierra Leone unlike any other place. As Corrie Ten Boom puts it, “There is no pit so deep that God’s love is not deeper still.”

We felt the depth of God’s love; amongst the stench and narrow trash filled alleys of the slums, while holding neglected children in an orphanage, when praying for those tormented by disease in hospitals and during our visits with ignored inmates at local prisons.

Many of these circumstances were tragic and heartbreaking, and yet I was often reminded of the goodness of God to redeem what was lost and to turn hearts back to him. We had the amazing privilege of partnering with Sierra Leonean believers through Youth for Christ (YFC) and with Jonathan’s Child Care Ministries (JCCM) who are doing just that.

Karim is only one of those who have been redeemed. Once lost, not just physically but also spiritually, JCCM found Karim and rescued him from a life that would have ended up on the streets. And though he was raised a Muslim, he has now been found in Christ and one day desires to bring the message of salvation back to the outer villages where he was born.

Throughout our time in Sierra Leone we were frequently reminded that though God chooses to use broken people like us, He is ultimately the one who turns a human heart towards Himself. The Lord continually brought me back to the words of Jeremiah, “I will give them a heart to know that I am the Lord, and they shall be my people and I will be their God...” —Jeremiah 24:7

Your prayers and gifts to this ministry have played a huge role in turning the hearts of hundreds of lives in Sierra Leone and beyond. Thanks for being a part. We are blessed and grateful!
Posted by The Halseths at 11:11 AM No comments:

5 REASONS WHY I LOVE MY JOB! 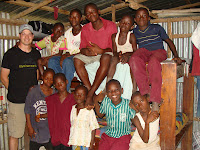 Without your prayers and gifts to this ministry it would be impossible to accomplish the work we have set out to do.

1. Training and Discipling the Next Generation
Before we even head overseas, we spend 1 to 2 weeks training students and staff disciplers in the basics of the Christian Faith as well as learning how to share Christ with others.

2. Reaching the Lost
Just as Jesus and his disciples went from village to village proclaiming the good news we had the opportunity to share with more than 1550 people in Sierra Leone.

3. Grounded and Rooted in God’s Holy Word
Students spent up to two hours reading, studying, discussing and memorizing the Bible every day of a Royal Servants summer.

5. Fulfilling the Great Commission
Jesus said to “Go into all the world and make disciples.” We have the awesome privilege to do just that not just in the summer but throughout the year!

Thanks again for your investment in God’s Kingdom.
Posted by The Halseths at 11:05 AM No comments: