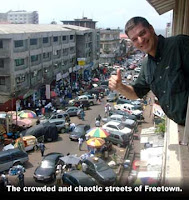 Planes, Trains, Ferrys, Boats, Mini Buses, Automobiles and Motor Bikes... using almost every mode of transportation, Jeff and I successfully made our journey all the way to Sierra Leone and back! Our adventurous trip was a success and our time with the Youth for Christ staff (YFC) rocked. Plans are now underway for another exciting Royal Servants mission trip to Sierra Leone this summer!

After seeing it for the first time, here are some impressions that Sierra Leone made on me:

Sierra Leone is really not a place you can fully describe in words—sights, sounds, smells, etc. One of the phrases that often came to our minds was, "You've gotta see this to believe it." I've traveled around the world and been in some pretty hairy places, but I was surprised to experience a fair amount of "culture-shock" in Sierra Leone. At the same time, I was not debilitated by what I saw, but eager and excited to serve. The warm, friendly and hope-filled YFC staff are truly a light in the darkness, and I am thrilled to partner with them to continue making a difference in Sierra Leone.

Imagine traveling to any major world city and NOT seeing a single traffic light to bring order to the busy streets. Then imagine taking the majority of the people throughout the country and placing them along the streets of that city. Such is the everyday crowded and chaotic capital city of Sierra Leone, Freetown. There are over 1 million people who live in Freetown. Most are "refugees" displaced from the civil war that took place in the 1990's. Many of these people now reside among the three major slums within the city. This influx of people has created countless needs and overwhelming challenges to overcome.

Though the majority of Sierra Leoneans profess to be Muslim, you might also get the impression that they are deeply Christian. After all, gospel music on the radio and Christian slogans on vehicles and billboards like "God will provide" are common place throughout the country. Yet, you don't have to look far to see that Christianity in many cases is simply just another religion to accept so that you may be "blessed" by God. One street vender even commented to me that the "gospel of Jesus" was his favorite religion, in hopes of earning some business from me. It breaks my heart to see Sierra Leone embrace religion and not a personal relationship with Jesus Christ. This is just one of the challenges with sharing the gospel in Sierra Leone.

4. Poor In Possessions But Not In Hope

The country of Sierra Leone is ranked the seventh lowest on the "Human Poverty Index." Most people live on less that two dollars a day and have very little possessions. Despite their poverty, they do their best to go about their lives as normal as possible. And though I saw hurt, I also saw hope in their eyes. I believe that is a God-given grace that all humanity shares. No matter what the situation is, there is always hope. I saw it in the school teachers as we passed through the slums, I saw it in the children playing in the orphanage, and I saw it in the eyes of YFC staff, who love their country. I thank God for the hope that he has planted in all our hearts - a longing for love, peace, and justice. The hope for Sierra Leone is only found in Jesus Christ and in his Kingdom. Pray that their eyes look upon Jesus for the hope that is in their hearts.

These are just a few impressions we experienced while we walked the streets of Freetown and traveled to the outer villages of Sierra Leone. All in all, we are stoked to be taking another team to Sierra Leone this summer. Whether working in the slums, loving on kids in orphanages or sharing Christ in remote villages; the ministry opportunities in Sierra Leone abound and lives are ready to be changed!
Posted by The Halseths at 3:49 PM No comments: