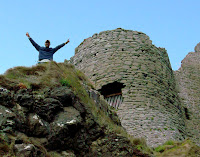 This year I am celebrating St. Patrick’s Day a bit different. Well to be honest with you, I have not done much to celebrate it in the past other than eat something green. But never the less, this year is different for me. Why? Well, even though this will be my second year leading the Royal Servants Ireland team (and third time to Ireland), I’m a bit embarrassed to say this but I knew very little about the real St. Patrick. Then again, I bet you or your friends can’t tell me too much about him either!

So here is the quiz!... Who was St. Patrick?
a. An Irishman who really liked the color green
b. The cartoon figure on a box of lucky charms
c. A legend about a Leprechaun with a pot of gold
d. A guy who loved God and was called to bring the gospel to Ireland

Ok, hopefully I made that easy for you… if you picked “d” you passed the quiz!

About a month ago I picked up a book titled “St. Patrick: Pioneer Missionary to Ireland.” While reading this book I have been totally encouraged and inspired by this man of God who left everything comfortable and risked his life to bring the gospel to the people of Ireland.

The amazing thing about his story is that his first journey to Ireland was not even as a Christian but as a 16 year old British slave to Irish raiders! At that time Ireland was a place of unspeakable demonic stronghold. Druid priests made child sacrifices to their gods and the people worshiped false idols. Patrick was sold as a slave into the service of a local Irish king. As a slave tending pigs and sheep he met the Lord and his faith was nurtured through prayer and fasting over several months and years.

He described his prayer life as a slave in this way: “Many times a day I prayed. The love of God and His fear came to me more and more, and my faith was strengthened. In a single day I would say as many as a hundred prayers, and almost as many in the night. I used to get up for prayer before daylight whatever the weather – snow, frost, rain – without suffering any ill effects. The spirit within me was fervent.”

For six years Patrick had lived under harsh extremes as a slave. When he had the opportunity he spoke to his captors about the love of Christ but they did not respond. In all his years of captivity, pain and rejection, he did not loose his faith and trust in Christ but clung to him all the more. Then one night he heard a voice: “Soon you will go to your own country.” The voice came again. “See, your ship is ready.”

Patrick left in the middle of the night with little supplies and walked for 200 miles before finding a ship on the coast making ready for sail. Through some miraculous events and answered prayer he was able to board the ship and escape his slave life in Ireland.

After a serious of event on his journey Patrick finally reached home in Britain. He settled in with his parents and began living a normal comfortable life. Though he desired to stay with his parents and take over the family farm one day it was not to be. Late one night he had a vision that changed his life: “I saw a man named Victoricus, coming from Ireland with countless letters. He gave me on of them, and I read the opening words which were: ‘The voice of the Irish…’ I thought at the same moment I heard their voice: ‘We beg you holy youth, come and walk among us once more.’” From that time on Patrick prepared for the ministry and eventually made it back to Ireland to fulfill Gods call on his life.

For thirty years Patrick faced the strongholds in Ireland and continued to preach the gospel from village to village, seeing many come to faith in Christ. By the time of his death he had baptized tens of thousands and helped establish hundreds of churches throughout the land. Within a century this once pagan land became predominately Christian, and began sending out missionaries into Europe.

St. Patrick died in his beloved Ireland, March 17th about 460 A.D. The land which once enslaved him, he had set free!

The true St. Patrick has quickly become one of my hero’s of the Christian faith. In many ways, he was like the apostle Paul. He preached the good news of Jesus to a pagan people who worshiped false gods and false idols, was imprisoned for months at a time, was faced with many trials and hardships and planted churches through out his missionary journeys.

I believe we can learn a lot from St. Patrick’s life in how we to can live our lives for Jesus. You may wonder how you can even relate to such a man of God. After all, I’m sure most of you did not receive a dramatic vision from the Lord telling you to leave your friends and country for the sake of the gospel. However, God has put a deep desire in the hearts of our students to do just that, and they have responded in faith!

I know the Lord has big plans for us this summer, not only in Northern Ireland but also in London. I just read a staggering statistic saying that less than 1% of teenagers go to church in the United Kingdom. And you can only imagine how few teenagers in that 1% who even have a real relationship with Christ.

May our hearts be broken for those in N. Ireland and London, who do not yet know the God who created them, the God who loves them and the God who gave his life for them!

I pray that you too will be able to celebrate St. Patrick’s day in a different way this year as you remember the God who transformed his life and called him to leave his comfortable life. May Jesus also do a work in you as you live your life for Him and for His glory!
Posted by The Halseths at 1:14 PM No comments: